Please open the website on a larger device to use the quick order functionality.

Our Past and Present

Ireland of the 19th Century

Prior to the establishment of Glasnevin Cemetery, Irish Catholics were not permitted to have any cemeteries of their own and buried their dead in the grounds of old churchyards and monasteries or in Protestant Churchyards. Legally, Protestant clergy of the established church were the only ones permitted to recite funeral prayers but over time there was a growing willingness to allow Catholics have a very brief time for prayers at the graveside.

However, when William Magee, an evangelist and steadfast opponent of Catholic Emancipation, became Archbishop of Dublin, all compromise was abandoned. One particular incident marked a turning point and the start of a huge change for Catholics. In St. Kevin’s Churchyard in September 1823 Dr. Michael Blake, Catholic Archdeacon of the Dublin diocese was about to offer some quiet graveside prayers when a Protestant sexton, who many believed was working on the orders of Archbishop Magee, stopped him. The funeral was that of Arthur D’Arcy a well-known and respected Dublin citizen whose brother would later become Lord Mayor. He had died suddenly in an accident and his funeral attracted a large crowd. This incident, witnessed by many, propelled the issue onto a wider stage.

The debate that followed naturally involved Daniel O’Connell who was at the height of his powers and, with the Catholic Association, was pushing for greater Catholic rights. In a signature move O’Connell forced the issue and became determined to establish a cemetery that would be open to those of all religions and none.

A committee was formed to carry out the far from simple process of setting up a cemetery and in 1828 two acres of land was secured in Goldenbridge for a fee of £600. The following years proved very successful for the cemetery and today Goldenbridge holds the graves of many historically significant figures. Demand and limited space in Goldenbridge led to the opening of Glasnevin Cemetery in 1832. The first burial there was that of Michael Carey, an eleven-year old boy from Francis Street in Dublin. Alongside the famous interred at Glasnevin, it is also the final resting place of almost 1.5 million people, including many who perished in the Great Famine of the 1840s and a later cholera epidemic.

In 1982 Dublin Cemeteries Trust opened the crematorium within the grounds of Glasnevin cemetery. The first built in the Republic of Ireland, cremation services have grown steadily in popularity in the intervening four decades, and we have expanded our services and locations to reflect people's preferences and modern funeral culture.

Palmerstown Cemetery opened in 1978 to serve the communities of south Dublin, followed by Dardistown Cemetery in the west of the city in 1990 and Newlands Cross a decade later. State-of-the-art crematoria were opened in both Dardistown and Newlands Cross in the 21st-century, and our original cemetery in Goldenbridge was reopened in 2017 with new burial spaces available for the first time in 150 years.

Serving Ireland in the 21st Century

As custodians of Ireland's National Cemetery, the Trust holds a unique and cherished role - as guardians of our collective past. The history of the almost 1.5 million people who rest within our cemetery walls is inseparable from the social and cultural history of Ireland as a nation.

While many of our most famous and significant graves and monuments depict the Irish Republican movement, people, and events throughout history, the cemetery's founding principle of equality has ensured that the stories of men, women and children of all social and political traditions are also respected.

Dublin Cemeteries Trust shares the State’s principles in the remembrance of historical events, which reaffirm the core principles of commemoration: broadening sympathies without abandoning loyalties, understanding the sufferings endured during that time, accepting the common history of the island, yet understanding that this is not a common memory, and accepting differing opinions.

Alongside the many prominent names buried at Glasnevin Cemetery, are victims of the Great Famine, civilians killed during the 1916 Easter Rising and combatants from all sides of the War of Independence and the Civil War. As the 100th Anniversary of the 1916 Rising approached, it was generally agreed that this very significant occasion needed to be marked in an appropriate and sensitive manner.

By working closely with Government and the organisers of the 1916 Commemoration, Glasnevin Cemetery emerged as a focal point for this internationally important anniversary. The Cemetery received widespread praise for the dignified, inclusive, poignant and sensitive ceremonies it held as part of the Commemoration Programme, and for the central nature of its role in that programme.

Pictured above: The unveiling of the 1916 Remembrance Wall featured in the Irish state ceremony at Glasnevin cemetery, to mark the 100th anniversary of the Easter Rising in April 2016.

President Michael D Higgins was among the dignitaries who attended the unveiling of the Cross of Sacrifice, erected in 2014 to mark the 100th anniversary of the signing of the Armistice which signalled the end of the First World War.

Pictured above: Prince Charles and Minister for Arts Heather Humphreys attended services to acknowledge those who died in both World Wars and in the Easter Rising at Glasnevin cemetery in 2017.

Pictured above: Charlie Flanagan, Minister for Foreign Affairs and Trade prepares to lay a wreath during a ceremony at Glasnevin cemetery in 2016, to commemorate the centenary of the execution of Roger Casement. Photo Brian Lawless, Alamy

We offer unique perspectives of Ireland's historic past - and space to contemplate our recent history. Among those who rest here are the women who perished within the confines of the Magdalene laundry; those who died while serving the Commonwealth forces during the two world wars; and the still born babies of the Angels Plot, whose bodies were not accepted within the consecrated grounds of most other cemeteries.

Our policy of equality throughout our history continues to this day, informing our approach across our Education & Heritage Service, confirming our standing as Ireland's National Cemetery and as a national centre for commemorative history.

Pictured left:
Flowers at the third annual Flowers for Magdalenes remembrance event, to mark all of the women incarcerated in the Magdalene laundries.

Pictured left:
A poignant symbol of solace in the Angels Plot, the final resting place of infants and stillborns.

Pictured left:
In 2015 a stone cenotaph was erected within the grounds of Glasnevin cemetery to acknowledge the lives of Irish men and women who died in World War II and are buried here.

More About our Work Today 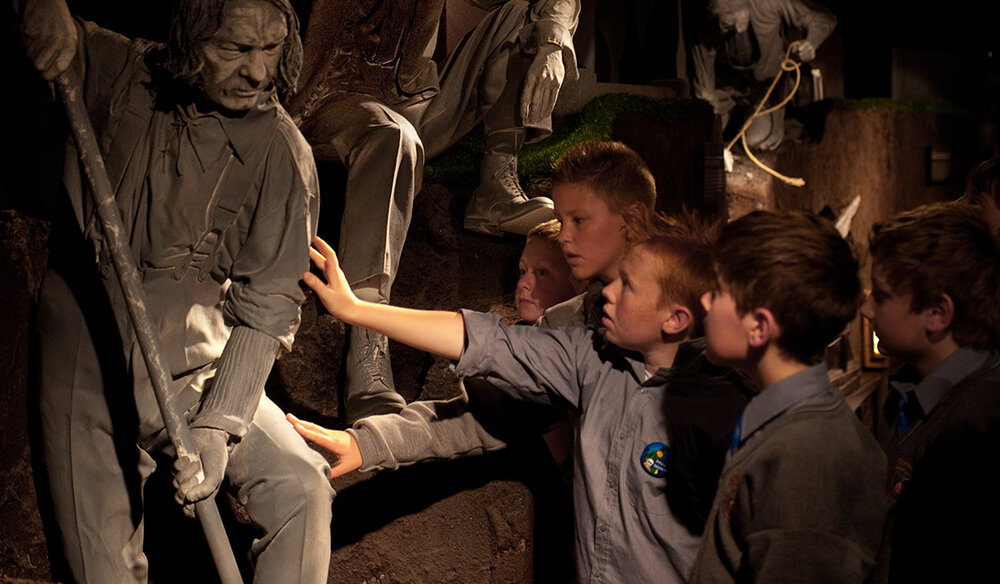 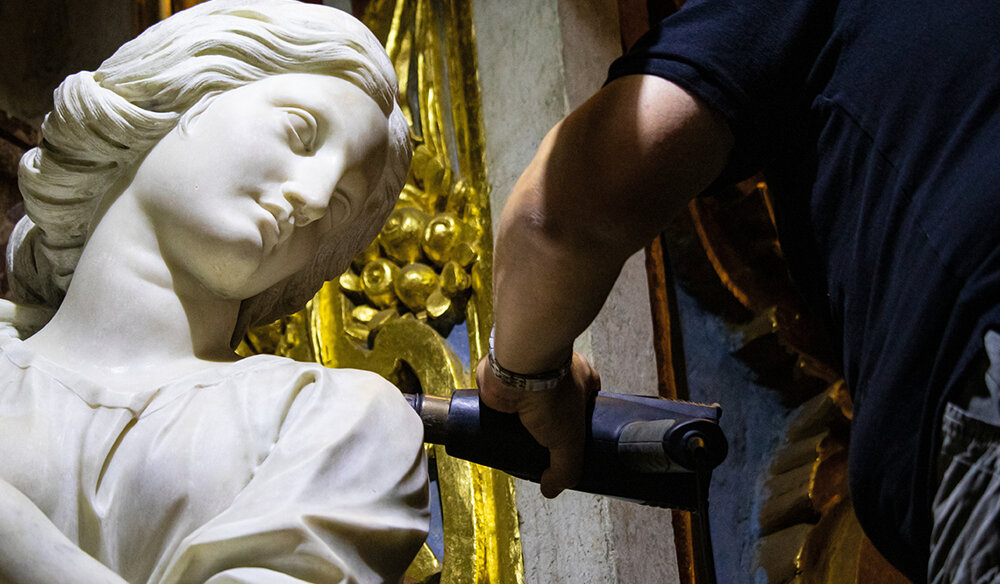 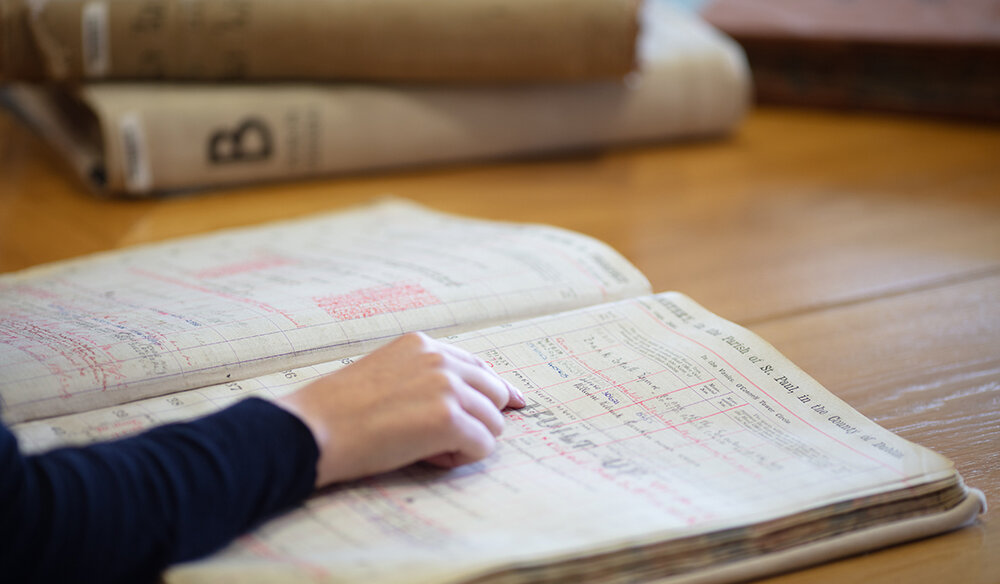 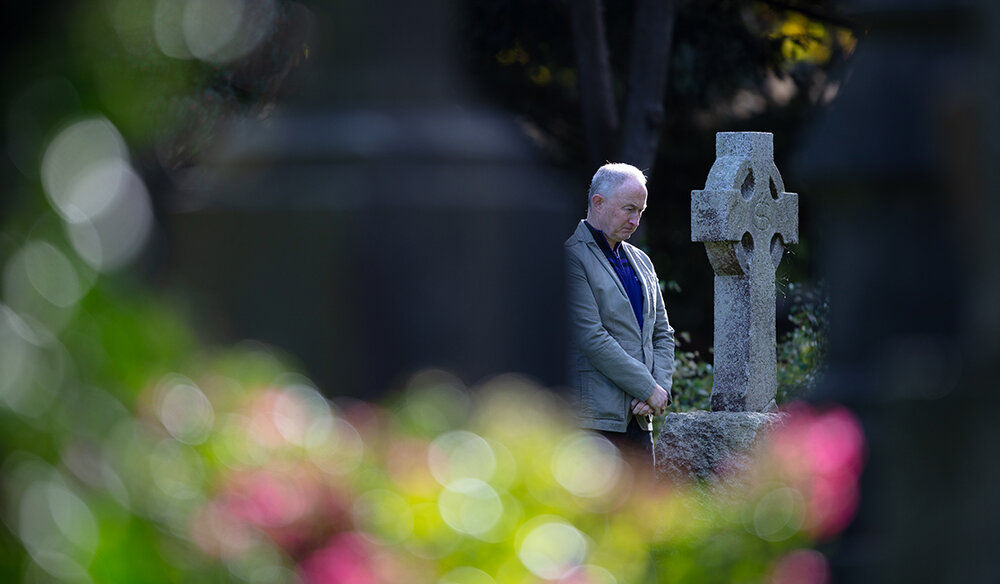